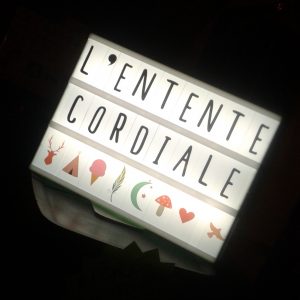 We’ve been asked many times if we have a bar here at Le Chant, and many times we’ve answered, no. Until now, that is! Our latest addition to the barn is our bar – aptly named L’Entente Cordiale! It’s been christened (a few times) already, and is proving to be pretty popular with guests.

We’ve had our Petite Licence, allowing us to sell wines and beers as well as soft drinks, since forever, but we hadn’t really formalised anything, selling from our kitchen, passing carafes of chilled wine through the passe plat. Guests didn’t really know what to do to get a drink either, so we thought it was high time we utilised some of the space we created in the barn for just that!

I returned from Saumur with a trailer fully loaded with everything I needed to build the counter and off we went….

Guests had been promised there’d be a bar a few hours later, and there it was – just a few hours later. Sure, it needed a few finishing touches, but they’d come in the next few days. For now though, a bar was born.
The day after, I set to with the electrickery – lights, plug sockets for the beer machines and other ‘stuff’ that needed to be plugged in. Fridges were moved into position behind the bar, the cupboards were stocked with glasses and pretty twinkling lights were an added feature. A lovely friend who’s an ex-camping & gîte guests but who now lives semi-permanently locally provided some pretty bunting and a light-up sign with the name thereon.

There’s even a USB charging point on the bar so you can recharge your batteries while you, er – recharge YOUR batteries with a glass or two! 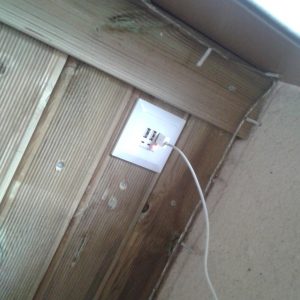 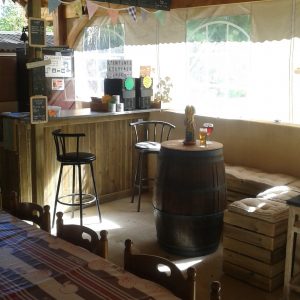 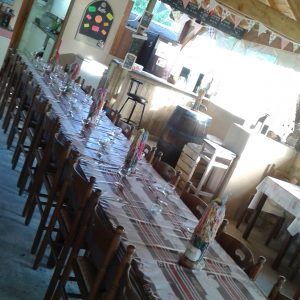 Pretty cushions have been added to the snug area, meaning you can sit in comfort, read a book or chat with mine hosts!

Syb’s the better looking one, on the left!

Hope to see you here soon!