Oddities of the Loire Valley

Once you’ve chosen your accommodation at Le Chant, you may want to visit some of the oddities we’ve found in the area!

The Loire Valley has its share of oddities, many of which can be found not too far from Le Chant d’Oiseau. For instance:

Twisted Spires
Ok, so many people know about the twisted spire of Chesterfield, in the UK. Here in the area around us known as the Baugeoise, there are quite a few ‘clocher tors’, or ‘twisted spires’. Were they built like that by design, or by deformities of the wood, as at Chesterfield? Surely, it’s a huge coincidence that there appears to be such a concentration of them in this area? One belief is that the spires twisted to follow underground waterways. Another is that they are like the windmills prevalent in this area in bygone times, and that they ‘face the wind’. Sailors believed them to be the work of inexperienced shipwights. Whatever the reasons behind them, the spires are impressive. Check them out at Mouliherne, Fougeré, Fontaine Guérin, Vieil Baugé, Chemiré sur Sarthe, Distré and Pontigné. 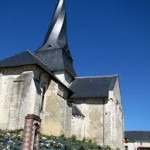 This region of ours is littered with the remains of hundreds (if not thousands) of years of industry. The soft chalk-like limestone known as tuffeau has been quarried in the area to provide not just the stone to build homes in the region, but has also been exported around the world to build cathedrals, churches and other buildings of note. The Loire Valley formed the floor of a vast sea 90 million years ago. Over the millennia, sediment from the sea floor, comprising fossilized living organisms and sand particles, became compressed to form what is now known as Tuffeau stone. Once the mining of the stone had peaked in the 15thC, there remained vast underground caves, and people moved in! Because of the constant year-round temperature inside the caves, they made attractive and practical dwellings. Along the banks of the Loire between Saumur & Montsoreau, you’ll see many superb examples of a style of architecture quite unique. As time went by and needs changed, the dwellings became enlarged and used for storage of wine (again because of the constant temperature), or for the cultivation of mushrooms. The Saumur area of the Loire Valley is the premier producer of mushrooms, which are exported globally.
There are a few museums in the area, dedicated to showing just what it was like to live in these troglodyte dwellings, the ones at La Fosse and Rochmenier being among the best and well known in the area. Of course, the French annotate food or drink to almost anything, and troglodyte life is no different. You’ll see signs everywhere for troglodyte restaurants, where the menu consists mainly of ‘fouée’. Fouée is a bread, cooked quickly in a very hot bread oven, which ensures the bread puffs up into a ball shape. It’s then split open and stuffed with delicious fillings such as rillettes (pork paté), black pudding, jam, or goats cheese. Regular visitors to Le Chant will know all about fouée, as we bake it in our own bread oven for guests to sample in season! It’s yummy! Have a look at the short video on our website here

To find out more about fouée, how it’s cooked, and what it looks like. To marvel at the troglodyte houses, carved from the cliffs, and dug from the ground, take a stroll around any of the villages of Turquant, Parnay, Montsoreau or Souzay and you’ll be amazed at the variations of styles of troglodyte dwellings. Some are simple, being workers’ homes, while others may have a façade of a tower, or turrets and are very grand indeed. 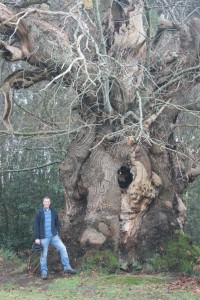 Not too far from us here at Le Chant d’Oiseau is the one of the commune’s oldest residents. It’s a chestnut tree and lives on, shedding its fruit each year still. Over 17metres in circumference, this old man remains one of the oldest living trees in France today. The shame is that it was almost lost in a pretty dense wood until not too long ago. The land where he stands changed owners, and the new owners decided to clear some woodland to create fields for horses. Imagine their surprise when they came upon this gargantuan? We won’t tell you where it is right now, but we will let you have directions when you visit!

Not too far from Saumur, towards Montsoreau at a village called Parnay, is the French equivalent of the Greenwich Meridian. Seriously! This point of the compass is at exactly 0 degrees – take your GPS to see for youself! This is the point where east meets west, and as oddities go, this is a good one! 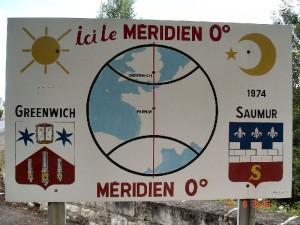 Boules de Fort is a game not dissimilar to carpet bowls, and crown green bowling in the UK, except that the playing area is usually a slightly convex, conctrete surface, finished to a very heavy shine. The bowls, or ‘boules’ are shaped in a similar way with a ‘bias’ on one side. The boule has a side where the wood is ‘tightened’ the most, and is therefore the heaviest, just as in crown green bowling in the UK.The game originated in the Maine et Loire department, with the earliest reference to it being in 1660. There are 50,000 players in 392 sociétés, of which 315 are in the department of the Maine et Loire. Most communes have a specially built hall where the game is played. It is highly competitive, but fun and family-friendly too. Many communes are quite happy for visitors to come along and watch a game, often being invited to ‘have a go’. 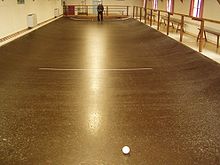 The ‘dolmen’ and standing stones of the Saumur area are numerous, and mysterious, and their purpose can only be guessed at. A dolmen, traditionally is a rock formation, usually consisting of three or four upright stone slabs as walls and covered with one or more huge stone slabs as a roof. Think Stonehenge with a stone roof, and you’re getting close! The major dolmen in Saumur is the one at Bagneux. This is a huge structure, and estimates of the weight of stone used in its construction are around the 500 ton mark! Curiously, none of the Loire Dolmens have evidence of being covered with earth, and no human remains have been found within, precluding their use as burial, or ‘passage’ mounds. The Bagneux Dolmen suggests by its internal dimensions, some form of a meeting place. A plaque at the site tells us that the overall length of the dolmen is 23m (75ft), with the internal chamber at over 18m (60ft) in length and at least 3m high. There are no carvings or markings present. This site is unlike any other (remaining), and the specific design does indeed suggest a function. As with the other Saumur dolmens, it was built with large stone slabs, squared and trimmed in a style particular to this area. Other dolmens can be found (varying in size) at Gennes, Baugé, St. Hilaire and further afield at Blois. Curiously enough, the Bagneux dolmen at Saumur is for sale – anyone want to buy a BIG rock or two? Bagneux Dolmen

Less than 50 of these unique structures remain in France. Their purpose? To guide weary travellers along the right road, or to offer solace and comfort in the dark. We have a Lanterne des Morts nearby in Mouliherne. Ours though, has been rebuilt and placed over a 12th century ‘ossuary’. An ossuary is a final resting place for the bones of the long-dead.

From Wikipedia: “An ossuary is a chest, building, well, or site made to serve as the final resting place of human skeletal remains. They are frequently used where burial space is scarce. A body is first buried in a temporary grave, then after some years the skeletal remains are removed and placed in an ossuary. The greatly reduced space taken up by an ossuary means that it is possible to store the remains of many more people in a single tomb than if the original coffins were left as is.”

For the more macabre minded among you, it’s possible to view these bones via. a small hole in the base of the lanterne. Take a torch!