The Second World War in Saumur

Once you’ve chosen your accommodation at Le Chant, you can look forward to seeing some of the lesser-known, yet important battle sites from the Second World War!

Almost anyone who visits Saumur will know that it’s the home to the Cadré Noir, or the French National School of Equitation. But how many realise the destruction caused here by the advancing German Army in June 1940? Walking around the town now, it’s difficult to imagine the damaged buildings, the rubble and the bodies. But happen it did, and it’s a tale of bravery on a scale to rival any other. And it happened right here.

The order was given for the Cadet school to retreat to Montauban, yet the small garrison of troops, mainly cadets aged 17-25 year old, voted to stay and defend the honour of both the cavalry school, and of France. You can read more about the heroic stand in the following links, in English.

Saumur eventually capitulated to vastly superior German forces, but not without considerable losses in both men, and infrastructure. To stroll around this beautiful town now, imagining the damage and destruction is difficult. But damaged it was. Traces can still be seen. Gaps where homes and businesses once stood. Tell-tale markings on the town hall walls from small cannon and machine-gun fire. Small arms bullet holes and markings on older houses along the waterfront at Saumur. 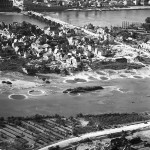 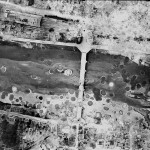 During the years 1940-44, Saumur settled into life as an occupied town. Germans were everywhere with garrisons at Doué la Fontaine and other outlying towns in the area. Rubble was cleared, some re-building works were started, life continued. An air-raid in late July 1942 by a lone aircraft concentrated on the Pont Cessart. Again, the inhabitants of Saumur continued their daily lives under the watchful eye of the occupying German forces. Life returned to ‘normal’. In late May 1944, the allies returned, dropping between 800 and 1000 bombs on Saumur.

An overhead view showing the damage caused to the railway tunnel, Saumur from the air

The bombardment continued for three consecutive nights. Again, from June 3rd-9th. On June 8th 1944, Lancasters of 617 Squadron, the ‘Dambusters’, led by the ‘pathfinder’ Mosquito of Leonard Cheshire VC, bombed the bridge and railway tunnel, in the hope of halting the movement of a Panzer Division from the south, attempting to reinforce German forces in the Normandy area. The mission was a complete success in terms of a military objective, though angered many residents of Saumur because of the loss of life and seeming ‘carpet bombing’ strategy. Again, in July, Saumur came under attack from the air. In total, during the summer of 1944, the death toll was 86 inhabitants of Saumur were killed by allied bombing. 70 were seriously wounded and 2600 victims made homeless. 250 homes were destroyed and 400 damaged.
On June 22nd came the American Army Air Force, namely 753 Squadron of the 458th Bombardment Group, this time carrying the new AZON (Azimuth Only) bombs. These were a departure from normal weapons in that they could be controlled in flight. Nicknamed ‘glide’ bombs, they were capable of serious damage and represented a shift away from the ‘carpet bombing’ techniques to a more ‘controlled’ target bombing campaign. This mission was carried out by 9 B24 bombers with an escort of 41 Mustang P51’s. The target was again the Pont Cessart at Saumur. The mission log confirms that both bridges (Tours was attacked on the same day) were destroyed. Only ten crews were selected for AZON missions, and the project was abandoned in September 1944 quoting ‘limited’ success.

All around in this area are reminders of the war years. From village monuments to honour their war dead, to plaques on walls informing that someone was deported from this village to a Nazi death camp, simply for his/her beliefs. In Baugé, you’ll find a fitting monument to the crew of a downed Mosquito, flying a reconnaissance mission to Le Mans. Along certain roads you’ll see the ‘Road to Freedom’ bollards, stretching from Normandy to Paris. There are monuments to the FFI (Forces Francais Intérieur), or ‘Résistance’, as they’re more widely known. There are lots places that bore witness to the inhumanity, and brutality of war. Many may have heard of Oradour Sur Glane, but how many will know of the tiny commune of Maillé, just south of us near Loudun?

Please do get in touch if you have any questions, or to see if there’s anything else we can do.
Once you’ve checked availabilty, please Contact Us to make a provisional booking.